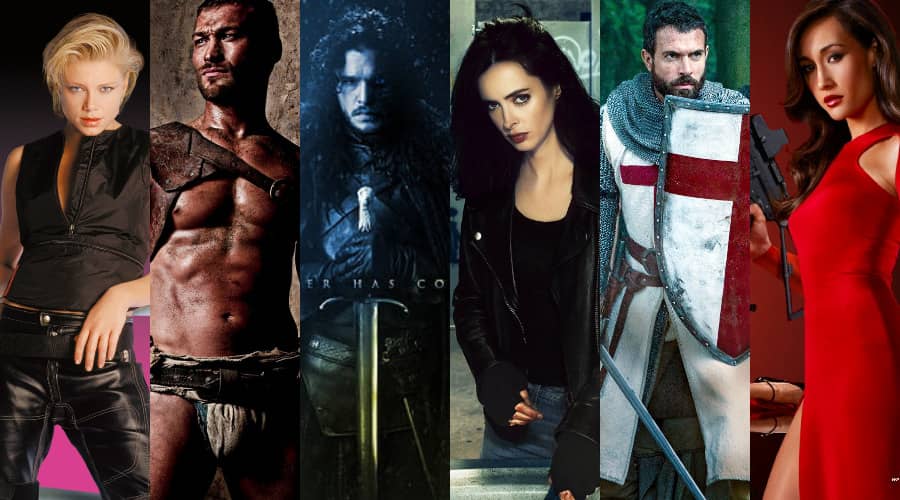 How many times have you run into some TV show and you asked yourself: “How is this still on?”. We continue to see the same boring TV shows in its 6th season or something. Yet, there are many great TV shows that ended too soon.

Some of the shows on the list below have simply been canceled after a couple of seasons, like Marvel Netflix TV shows, which is crazy considering their rating on IMDb (Daredevil 8.6, The Punisher 8.5, etc).

Others have been shortened and concluded badly, like Game of Thrones and House of Cards. You can see their IMDb rating dropped drastically for the final season and the final episodes.

There are also TV shows that are just concluded and the ending is not bad at all, what’s more – it’s natural, but we would like it if they had lasted longer because they are such good shows. Those are series like Nikita, La Femme Nikita or Episodes.

Here is the list of top 16 TV shows that ended too soon (ordered by release date):

La Femme Nikita is a Canadian action-drama based on the film Nikita by Luc Besson. Played by awesome Peta Wilson, it follows a young woman who was falsely accused of murdering a police officer and then recruited into secret counter-terrorism organization called Section One.

There were only two ways for Nikita, to be killed or become a part of a ruthless organization. Throughout the series she struggled to retain her compassion and humanity in an environment where it is nearly impossible to do that.

The show was the highest-rated drama on cable at the time. It was concluded after five seasons, but anyone who enjoyed this series would say that five seasons of Nikita is not enough.

Deadwood is set in the 1870s and it revolves around characters of a camp that is becoming a town as well as corruption and crime that followed the process. The show won many awards and it’s considered as one of the best out there. Three seasons of Deadwood was really not enough and it was definitely concluded too soon.

Fortunately for all the fans, a decade after the show ended, Deadwood: The Movie was released. It is set 10 years after the events in the last season and it kind of corrects the ending of the show that looked unfinished.

My Name is Earl is, like Episodes, the only other sitcom on this list. It follows a small-time thief who wins $100,000 in the lottery but loses it immediately after being hit by a car. He learns about karma and decides to make a list of all people that he has ever wronged with a plan to visit them all and make up for all of his mistakes. The series was unexpectedly canceled after four seasons.

The story of a famous historical figure Spartacus, a Thracian slave who became a gladiator and led the rebellion against Rome. Only three seasons (well, technically four) of Spartacus is really not enough.

After the first season, Spartacus: Blood and Sand, the main actor Andy Whitfield was diagnosed with cancer so the next season was delayed. In between the first and second season we enjoyed the prequel miniseries entitled Spartacus: Gods of the Arena.

The official season two of Spartacus (with a different actor starring as Spartacus), is titled Spartacus: Vengeance and the final season is Spartacus: War of the Damned. All of the seasons including the prequel were really exciting and we surely could see more of this show.

This is the American version of Nikita, played by (also) awesome Maggie Q. The storyline here is different from La Femme Nikita but equally good. Nikita is a rogue agent who worked for a secret government-funded organization known as Division. The Division has also gone rogue and has been responsible for all kinds of black operations including assassinations and sabotage. They have made Nikita into an assassin and she wants to take the organization down.

Unfortunately, we only saw four seasons of this great series, with the last season drastically shortened to only six episodes.

The noble families in the Seven Kingdoms of Westeros and a descendant of a dynasty exiled to Essos are fighting for the Iron Throne. Meanwhile, winter is coming along with the threat from the undead creatures from the north.

Yeah, we had 8 seasons, but that’s not enough when it comes to Game of Thrones. Besides, the last two seasons were shortened. This TV show could have easily gone on for at least 10 full seasons.

Game of Thrones had a record viewership and is still (even shortened and with the bad ending and) one of the best tv shows ever made.

British couple Sean and Beverly made a huge success as writers of a sitcom in Britain and now they have been offered to go to Hollywood to write the remake for the American audience. Unfortunately for them, the network starts to make a lot of changes, transforming the show into something totally different.

Not only are the name and plot different, but the lead role cast Matt LeBlanc is not what they expected. This is LeBlanc’s first return to television since Joey and it was a complete win. Episodes has received positive reviews and Matt won a Golden Globe Award for Best Actor. We enjoyed all five seasons of the show but we wish there could be more.

Set in Washington, D.C., House of Cards is the story of an amoral politician Frank Underwood, a power-hungry congressman who will do anything to become the president. He starts to work behind the current president’s back and together with the help of his wife Claire, they will eventually make their way to the White House.

Many of us were very excited when this political thriller started to stream on Netflix. House of Cards is the first TV series produced for Netflix. The show received positive reviews and many award nominations.

Following allegations against Kevin Spacey the final sixth season was done without the main character Frank Underwood. Reviews on IMDb for the first five seasons are over 8 while the final season dropped down to 4. That says it all.

Daredevil was the first Marvel Netflix series based on Marvel Comics. It is set in the Marvel Cinematic Universe (MCU), acknowledging the continuity of the franchise’s films. Matt Murdock is a blind lawyer by day and a vigilante crime fighter Daredevil by night. He uses his heightened senses to keep the streets of New York City safe.

The TV show had very positive reviews, in fact it was one of the best rated TV shows out there (8.6 on IMDb). Still, the show was canceled after only three seasons. Daredevil is also one of the main protagonists in the crossover miniseries The Defenders.

We should also mention Daredevil’s cameo appearance in Spider-Man: No Way Home as well as the fact that a reboot of the series is in development.

Jessica Jones is the second Netflix series based on Marvel Comics and it’s a part of the Marvel Cinematic Universe (MCU). The TV show follows a woman with superpowers (super human strength and durability) who dropped her superhero career after an incident in which she had killed someone. She runs a detective agency and investigates weird cases involving people with strange abilities, including the main villain Killgrave.

Even with the positive reviews the TV show was canceled after only three seasons. As with Daredevil, we were at least able to see her a little bit more in the miniseries The Defenders.

Luke Cage is the third Netflix series based on Marvel Comics and it’s a part of the Marvel Cinematic Universe (MCU). Cage is a former convict involved in an experiment that gave him unbreakable skin and superhuman strength. He fights crime and becomes a hero of Harlem.

Like Jessica Jones, Luke Cage TV show also had positive reviews, but was unfortunately canceled after only two seasons as a result of creative differences. Luke Cage also appears in the crossover miniseries The Defenders as well as in the Jessica Jones series (which was actually the first appearance of the character, before the Luke Cage series).

Feed the Beast is a crime drama starring David Schwimmer and Jim Sturgess. The storyline is the following: Two friends, one a wine expert and the other a cook expert, decide to open a restaurant and consequently they have to deal with criminals, corrupt officials and the mob. The show was canceled after the first season, which is too bad, especially because of the fact we were seeing Schwimmer in a different light. The season was interesting and it had a lot of potential.

Marvel’s Iron Fist was the fourth Marvel Netflix series based on Marvel Comics and set in the Marvel Cinematic Universe. Same as Jessica Jones and Luke Cage, it also led to the crossover miniseries The Defenders (2017).

The series follows a young man with martial arts skills and the ability to use a mystical force called Iron Fist. After being presumed dead for many years, Dany Rand (Iron Fist) returns home to reclaim the family company as well as to protect New York.

Iron Fist was canceled after two seasons, the same as Luke Cage. Even though it didn’t have strong reviews like Jessica Jones and Luke Cage, it still had solid viewership and it’s definitely worth watching.

We met the Punisher character in the first Marvel Netflix series Daredevil. In this spin-off we learn more about Frank Castle and how he became a vigilante known as Punisher, who uses lethal methods to fight crime. Former Marine veteran Frank will uncover a conspiracy that goes way beyond what was done to his family.

Netflix canceled The Punisher after two seasons (yet the TV show has a rating of 8.5 on IMDb).

Knightfall is a fictional historical drama telling the story about the final days of the Knights Templar. Years after the Templars’ failure of the Crusades in the Holy Land, the senior brother of the Knights Templar, veteran warrior Landry, follows the news that the Holy Grail has resurfaced after many years.

After Game of Thrones ended, this was one of the TV series that many of us fell into as a replacement. The show was canceled after only two seasons, which is crazy considering the fact that all kinds of bad shows are still running.

If you are a Superman fan, this TV series is a must. It follows Superman’s grandfather Seg-El and his fight for justice on planet Krypton. It is set 200 years before Superman was born. After being ostracized, Seg-El, the leader of the House of El, fights to redeem the family’s honor and save his planet from the upcoming chaos.

Krypton was canceled after two seasons, apparently after ratings dropped in the second season. Still, it is a show worth watching, especially if you can’t get enough of the Superman story.

According to IMDb, this is the rating for the top 16 TV shows that ended too soon (from the list above):