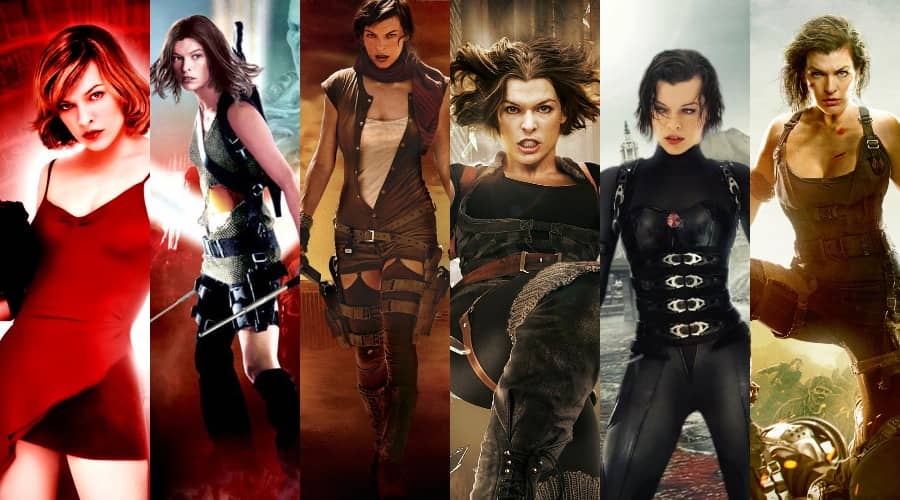 There are six movies in the series and all of them were written by Paul W. S. Anderson. He also directed the series, with the exception of Apocalypse and Extinction (he worked on Alien vs. Predator and other projects at the time).

The film series follows Alice (Milla Jovovich), a former security operative for the Umbrella, a corporation that released the T-Virus into the world and turned most of the population into zombies. Alice must stop their experiments while fighting zombies and monsters.

Originally, this was supposed to be a trilogy, but Paul W. S. Anderson expanded the films into two trilogies instead. The film series was rebooted in 2021 with Resident Evil: Welcome to Raccoon City (2021). Here is the list of all Resident Evil movies (original series) in the correct order:

Alice awakens in a deserted mansion realizing she can’t remember anything. When a group of commandos from Umbrella Corporation breaks into the mansion, she will find out that she also works for the same corporation. They all need to enter the secret underground research facility named Hive and shut down the Red Queen, AI that controls the Hive. The Red Queen sealed the Hive and killed everyone after the T-virus was released. What the group of commandos doesn’t know is that the T-virus has turned everyone into hungry zombies.

Compared to the other movies in the series, the first one does not have many fight scenes. The most notable fight scene is the one where Alice fights against the undead dogs (she finishes by round kicking the dog in the head). Still, the first movie is the best and most intense in the series, with an excellent soundtrack.

Besides Milla Jovovich in a lead role, every Resident Evil movie has an additional tough woman in a supporting role. In this one, it is Michelle Rodriguez, who plays one of the elite soldiers from Umbrella named Rain. She is actually the first one in the movie who encounters a zombie. There is a funny moment on the train to the Hive when Rain cannot open the door and everyone, including Alice, is looking at her. She turns to Alice and says: “You got a problem?”.

The last scene in a movie is an epic scene for every Resident Evil fan. Alice escapes the Raccoon City Hospital and finds out that the city is deserted and ruined. She grabs a shotgun from the abandoned police car and continues through the streets while the main Resident Evil theme plays in the background.

After reopening The Hive, the T-virus has spread throughout Raccoon City turning most of the population into zombies. The Umbrella Corporation quarantines the city, leaving the survivors trapped inside. Alice will team up with a group of survivors and they will all have the same goal: rescue the daughter of Dr. Ashford who promised to help them leave the city. The problem is that besides zombies, undead dogs, and mutants, there is also experimental creature Nemesis they need to deal with.

The second movie introduces several interesting characters with whom Alice will team up: S.T.A.R.S. operative Jill Valentine, civilian L.J., and Umbrella soldier Carlos Olivera. It’s the most interesting group in the whole series.

The action sequences from this movie are probably the best in the series. Some of the best are: The Church scene when Alice breaks through the window on a motorcycle and saves the survivors; Jill Valentine walks into a police station and starts killing the undead; Umbrella soldier Carlos Olivera jumps from a helicopter to save a girl while killing zombies before even landing; Umbrella soldier Nicholai vs the undead dogs when he saves Jill Valentine.

Jill Valentine is a super awesome Tomb Raider-looking character, played by Sienna Guillory. In the opening scene, she walks into a police station and starts shooting the zombies. It’s one of the best scenes in the movie. There is a funny moment in the Church after Alice breaks in and kills the Lickers. Jill, who probably thought, up until that moment, that she was the main baddass in town, says to Alice: “Who the fuck are you?”.

When it comes to the funny moments, most of those goes to L.J. (played by stand-up comedian Mike Epps). In one scene L.J. walks into a building full of S.T.A.R.S. members and a S.T.A.R.S. officer hands him a shotgun, to which he replies: “Motherf****r, please. Look. [opens up his jacket revealing two gold guns] My shit is custom”. In another scene, Carlos was bitten and L.J. didn’t know so he says to Carlos: “You should have told me you were bit, motherf****r, I’m hanging with you and shit!“.

This is the one in the desert, Mad Max-style, while Alice has a cowboy outfit. The T-virus has now spread around the world. While wandering the wasteland and after fighting off a family of marauders, Alice discovers a notebook that refers to Alaska as an uninfected area. She will soon rejoin the convoy of survivors led by Claire Redfield (Ali Larter) and two familiar faces we know from the previous movie, Carlos Oliveira and L.J. Wade. Meanwhile, in the middle of the Nevada desert, in the underground Umbrella facility, Dr. Isaacs continues his experiments, and capturing Alice is his priority.

There are some interesting scenes in the movie, like the fight with zombies in Vegas where Alice shows some good moves, or the fight in the pit while being kidnapped as well as the scene where Carlos Oliveira sacrifices himself for the others. The best scene in the movie is probably the one with the convoy running over some zombies while the “In-A-Gadda-Da-Vida” song plays in the background.

The main soundtrack that repeats throughout the movie, which is a remix of the original Resident Evil theme, is really good.

After assaulting the Umbrella HQ in Tokyo where she failed to kill the head of corporation Albert Wesker, Alice flies to Alaska searching for a safe haven called Arcadia. Wesker managed to inject her with the anti-virus, which removed her supernatural abilities. On the other hand, he used the T-virus to gain them. In Alaska, Alice finds Claire Redfield (returning character from Extinction) who has lost her memory. The two will then travel to Los Angeles and find themselves with a group of survivors living in a prison surrounded by zombies.

The best action scenes are the ones when Alice and the clones attacked the Umbrella HQ and the fight with the Executioner in the prison showers. Alice has the best outfit (with the two shotguns) so far in the movie franchise. The only better outfit is in the Retribution.

Alice is captured by the Umbrella Corporation in their underground facility in cold Kamchatka. Jill Valentine is the returning character, only this time brainwashed and working for Umbrella. Together with the former Umbrella top agent Ada Wong, Alice needs to go through several simulations. This time Wesker will give Alice her superhuman abilities back so she can fight the Red Queen.

The best fight scene in the movie was probably the one in the New York City simulation, where Alice and Ada defeat two Executioners. Alice has an awesome outfit in this movie.

In this, sixth and final movie in the series, Alice will go back to where it all began, the Hive in Racoon City. There is an airborne anti-virus there, which can kill every organism infected by the T-virus. Alice will team up with a group of survivors (including Claire Redfield) and she will encounter the real Dr. Alexander Isaacs and learn that she previously killed a clone. Alice will also learn that some rich and powerful people have been stored in cryogenic capsules in the Hive, including Alicia Marcus, Umbrella’s co-owner. Isaacs will reveal to Alice that she is actually a clone of Alicia (which was kind of disappointing news). Eventually, Alice will release the anti-virus and kill the undead. The Red Queen will upload Alicia’s childhood memories into Alice.

All Resident Evil Movies Ranked According to IMDb

Our own ranking order is pretty much the same as the release date order. So we would rank them like this: