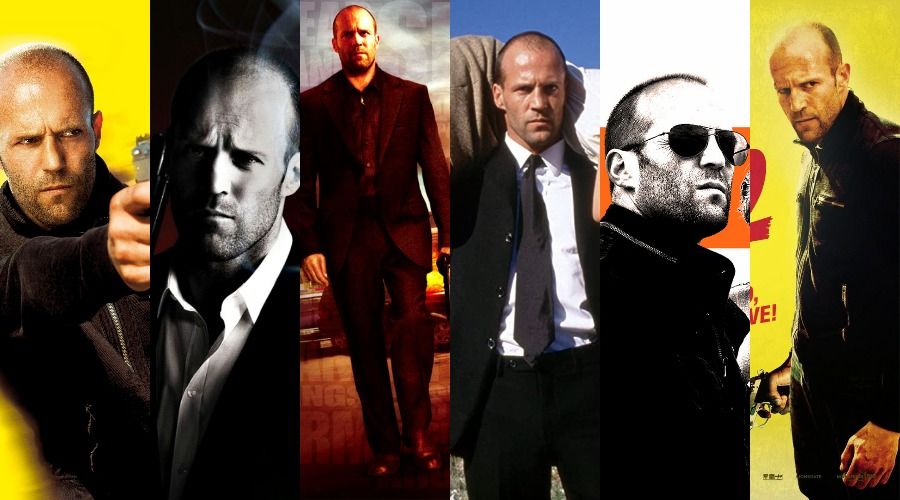 He started movie career in Guy Ritchie movies Lock, Stock and Two Smoking Barrels and Snatch as a part of the ensemble cast. The success of these movies has put Statham in the public eye and he was able to break into Hollywood. The best Jason Statham movies with a lead role were made in the 2000s decade.

Every big action star has its own movie franchise, and in case of Jason Statham, that is the Transporter trilogy. The success of the first one in 2002 has spawned two sequels, Transporter 2 (2005) and Transporter 3 (2008).

There are several other movies from the 2000s that are a-must watch, movies like Crank, Crank: High Voltage and The Bank Job.

It was the last decade (2010-2019) where he found real commercial success. Beside action series The Expendables (2010–14), where he is part of the best possible ensemble cast, he has also appeared in the Fast and Furious franchise, finishing the decade with huge commercial hit Hobbs & Shaw.

With Statham as a leading actor, there are several other movies worth to mention: The Mechanic, Parker, The Meg, etc.

Here is the list of 20 best Jason Statham movies (ordered by release date):

After participating in a rigged card game, four friends find themselves in a serious debt to crime lord. To pay off debts, they decide to rob a small-time gang in the flat next door. The confusion really starts when a pair of antique shotguns go missing in a completely different scam.

In this British crime comedy, Statham is a part of an ensemble cast, together with Brad Pitt, Benicio del Toro and others. It’s his second collaboration with Guy Ritchie. After this movie, Statham was able to break into Hollywood.

The story is set in the London criminal underworld and there are two plots that will intertwine. In one plot there is a search for a stolen diamond, and in the other Statham plays a boxing promoter Turkish, who gets involved in a match fixing by a criminal called Brick Top.

Statham plays Frank Martin, a highly skilled driver, who transports any kind of package for clients with no questions asked. He has a rule not to open packages, but once he sees that his latest package is moving, he decides to break the rules and open it. It turns out to be a beautiful gagged woman. Now, both their lives are in danger.

Transporter is the ultimate Jason Statham action movie. It is the first installment in the Transporter franchise and his first lead role. All the stunts in the movie have been done by Statham himself.

In this one, transporter Frank Martin surfaces in Miami where he temporarily drives and protects the son of a wealthy US official. When a boy is kidnapped by mercenaries hired by a Colombian cartel, Frank must save him and stop the kidnappers’ plan to release a deadly virus.

Professional assassin Chev Chelios (Statham) gets poisoned with “The Beijing Cocktail” by his rival Verona. The poison will kill him if his heart rate drops. In order to stay alive he must keep his adrenaline high and he does this in various ways, by taking drugs, fighting, etc. Beside protecting his girlfriend Eve, he is also set to get his revenge against those who poisoned him.

The film was followed by a sequel, titled Crank: High Voltage.

The Bank Job is a 2008 heist thriller based on the 1971 Baker robbery in London. A former model Martine offers Terry Leather (Statham) a lead on a bank hit. He assembles a team, not realizing her real goal is a safe-deposit box with compromising photos of a royal.

According to the movie producers, the plot is based on a real story that was prevented from being told in 1971 to protect a member of the Royal Family.

The US economy has collapsed and the crime rate has increased which led to privatization of prisons. In one such prison warden Claire earns profits by broadcasting a brutal car race over the internet. When a steel worker Ames finds himself in that prison, he has a choice to either participate in the death race or rot in prison forever.

In the third and final installment of the Transporter franchise, Frank Martin is forced to take a job. He has a bracelet on his wrist that will explode if he moves away from the car. The job is to transport a kidnapped woman from Marseilles to Odessa. On the route he needs to deal with thugs who want to intercept the girl’s safe delivery to her destination.

It is the sequel to the 2006 film Crank and it’s even crazier than the first one. It’s a non stop action as the first movie, but with a lot of humor added.

This time ex-hitman Chev Chelios is kidnapped and his heart is stolen and replaced with a battery powered so that it can keep him alive only for a short time. While being out there trying to find his heart, he needs to keep himself electrically charged if he wants to stay alive.

Statham stars as Arthur Bishop, an elite assassin with a unique talent for cleanly eliminating targets, making his hits look like accidents or suicides. Things will take an unexpected turn when he needs to take out his own mentor Arthur. This murder will bring Arthur’s son, who now seeks revenge, to his doorstep.

The Mechanic is a remake of Charles Bronson film from 1972.

Detective Tom Brant is assigned to take down a serial killer “Blitz” who kills police officers. Investigation will lead him to the killer, but the evidence against him is weak. After he is released, Brant and his new partner Nash will put the killer under surveillance because they are expecting another attack.

In this action thriller based on a novel (which was loosely based on real events), Statham plays an assassin (again) who comes out of retirement to save an old friend, played by Robert De Niro.

Statham plays Luke Wright, an ex-cop and a cage fighter whose life is destroyed by Russian mob because he won a fixed fight. While contemplating suicide in a subway station, he realizes that young girl Mei is chased by Russian mafia. He winds up protecting the girl, but soon finds out that the girl is a math genius, and that Chinese Triads and corrupt New York police are also after her. The criminals want to use her in their criminal activity.

Parker is a professional thief who is double-crossed and almost killed by his crew after the heist. Now he sets out for revenge, but he has help from a real-estate agent (Jenifer Lopez).

It stars Jason Statham as an alcoholic homeless ex-soldier haunted by his past. One night while he is chased by a group of thugs, he hides in an empty apartment. Realizing that the resident will be absent for some time, he seizes the opportunity to assume the owner’s identity.

A former DEA agent moves with his daughter to a small Louisiana town. Everything is quiet until his daughter fights off a bully in a school, like her father taught her to. Turns out that the boy is related to a local meth drug lord who now discovers that a former DEA agent lives in the same town.

The story is based on a novel and has been adapted into a screenplay by Sylvester Stallone.

Statham plays Nick WIld, a recovering gambling addict and Las Vegas bodyguard. When a woman he knows, Holly, is beaten, she asks Nick to find the man responsible. It will turn out to be a gangster DeMarco. When Nick confronts DeMarco, he is attacked, but the gangster is overpowered. Holly arrives and takes $50,000 from DeMarco instead of killing him. Nick takes his half of the money and goes to the casino to play blackjack, but the problems with the mob are not over.

In a Mechanic sequel, Bishop is retired and lives under a secret identity in Rio de Janeiro. His arch-nemesis shows up and kidnaps his girlfriend, in order to force him to complete three difficult assassinations.

The movie was a commercial success grossing $125 million worldwide.

A group of scientists encounters a largest shark ever to exist called Megalodon, believed to be extinct a long time ago. To rescue the crew, they seek help from a deep-sea rescue diver (Jason Statham). He has already encountered this beast, losing half of the crew, but nobody believed him. Now he is their only chance.

Hobbs & Shaw is Fast & Furious franchise spin-off with Dwayne Johnson and Jason Statham reprising their roles of Luke Hobbs and Deckard Shaw. The plot follows Lawman Hobbs and outcast Show who must team up to fight terrorists with cybernetic implants that allow superhuman abilities.

We could have added The Expendables to the list too, but we consider those to be Stalone’s movie, not Statham’s, even thought, he is a co-star together with Stalone. We decided to leave those out and add only the lead roles.

According to IMDb, these are 15 best Jason Statham movies in the lead (or lead ensemble) role: